How to Help First-Generation Students Succeed

Freshman year of college is a time of transition and change for all students. Add a pandemic to the mix, and it’s even harder. For first-generation college students, those whose parents don’t hold a four-year degree, the challenges can loom even larger. From navigating financial aid to a potential lack of access to networking and job opportunities, these students are- in many ways- figuring it out on their own. Associates Courtney and Phylicia, who were both first-generation college students, know how pivotal support is to first-gen students in overcoming these challenges and finding a meaningful path.

“I was raised by a single mom who tried her best to prepare us for college, and she was a great help and support all throughout college,” says Courtney, Campus Recruiting Lead, First Generation College Students. “Her encouragement helped push me to start and finish college. However, she did not go to college. She helped us by putting us in a great school district, but there was still a large learning gap. I had to research and learn more about financial aid and the college application process on my own, and I didn't have any connections who could help prepare me for that.”

Today, the term “first-gen” is common but that wasn’t always the case. “When I was a college student, ‘first-gen’ was not a widely known term,” says Courtney. “I was not aware of opportunities—or even the term—until a few years ago.”

The path to a dedicated first-gen program

Based on their own experiences, Courtney and Phylicia wanted to find a meaningful way to give back. “I wanted to help develop a program to support first-gen students and give them opportunities that I did not have or wasn’t aware of while I was in college,” shares Courtney.

Fortunately a program focused on first-gen students had been brewing for a while at Capital One, thanks to Melissa, Head of Campus Diversity, Early Engagement, & Partnerships. “This is actually something that I had been researching and thinking a lot about for about three years,” shares Melissa. “We’d gone back and forth about what this program should look like, from a short summit-type event to how to even more deeply engage first-gen students.”

In the summer of 2020, Melissa officially got word that she could move forward with a dedicated program for first-gen students. All she needed was a team to make it happen. And this was just the opportunity that Phylicia and Courtney were looking for.

Following their passion to launch a new program

Phylicia joined Capital One in 2018 as a Technical Recruiter, but her true passion was in the Diversity, Inclusion and Belonging space. “I joined Capital One as my first job out of college,” says Phylicia. “I represent the first-gen student who still didn't know what they wanted to do and I happened to fall into recruiting. I wanted to work with college students and ended up on our campus team, primarily working in tech. The Diversity, Inclusion and Belonging team always caught my eye, as a Black woman, as someone who fell into so many different categories in the diversity bucket, I wanted to delve into that. And so hearing that the first-gen initiative was even a thing, it was just like the embodiment of my life, so far.” Having participated in a program for first-gen students herself, Phylicia knew the impact it could make on others.

Courtney also found her passion in the first-gen space. “I celebrated my five year Capital One anniversary this year, and I've been with campus recruiting the entire time,” says Courtney. “I've always had a love for connecting with college students. With this most recent role transition, it's taken a lot of those same desires and passions and directed it to focus in the first-gen space.”

Together with team lead Melissa, Courtney, Phylicia, and colleague Reema launched the First-Gen Focus program, a 10-to-12 month cohort program that offers first-gen college students virtual workshops, career exploration and mentorship to help set them up for success in college and beyond.

“While I am not a first-generation college graduate, I am the daughter of one,” shares Reema, Campus Program Coordinator, First-Generation College Students. “Understanding the various hurdles that college students face while navigating college, and life after college, I am excited to lead with heart in this space.” 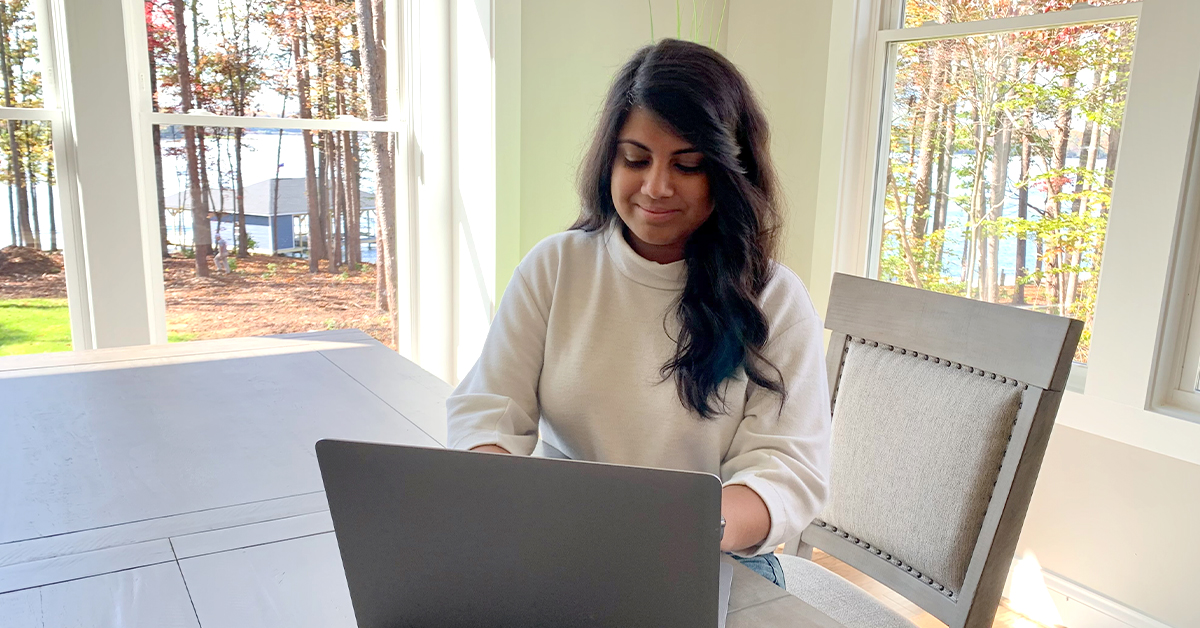 Support through First-Generation programs and a sense of community

“The goal here is to support these students throughout their first year of college,” says Melissa. “They don't typically have access to people or resources that can help guide them on foundational things that will help them live their best life during that first year of college. We're here to provide the tools and support to make sure that they have success in school and can explore career options.”

The students have already been open and honest about the struggles they've faced, and what a difference it makes to have a company invest in them in a meaningful way. For example, one of the students who attended the introduction event actually created their first LinkedIn profile right after, armed with new knowledge about networking tools.

The program is focused on three core program pillars: Financial Well-being, Personal Wellness and Career Readiness & Persistence. “We felt like those were three major facets of their first year where it would be incredibly helpful to have additional support, where we could step in and help,” says Melissa.

Each cohort includes approximately 50 first-year students from universities across the country, representing a wide variety of majors, backgrounds and interests. “Now more than ever, first-generation college students need more support,” says Reema. “Through our program, the selected students will be provided the necessary knowledge and resources to grow. This program is not just about education, it’s about making a change within a community of talented, driven and hard working students.”

For first-gen students, being part of a network of others who can relate to them helps set them up for future success. “ Being able to come together from schools all across the country and build a community with each other is a huge benefit that we've seen a lot of students appreciating already,” says Courtney. “There are opportunities to network and make connections with each other, which is going to be so impactful.”