MC is a Director in Risk Management at Capital One. He leveraged his background in accounting and auditing to help build out Capital One's financial internal controls program (Sarbanes-Oxley) and has since transitioned to Operational Risk focusing on the Finance division. MC believes that corporate America can play an important part in social justice and equality, helping to lift up all aspects of our communities to make us stronger as a whole.

It’s important for me to work for a company that demonstrates and shares similar values to myself. It’s no coincidence that I ended up working at Capital One, which has demonstrated its allyship to the LGBTQ+ community in so many meaningful ways; most recently with its unabated endorsement of the Equality Act. But prior to joining the company, I had first-hand experience with how inequality in the law and the complicated web of immigration almost kept me from being with my husband. Thanks to amazing allies, our story has a happy ending. But for many in the LGBTQ+ community, there is still much to be done to bring about equality.

Finding love on a different continent

Until I fell in love, I never had a reason to think I’d permanently live anywhere besides the small town where I grew up in South Africa. After university, I enjoyed the early years of my professional career at one of the big four accounting firms and, in that role, had the opportunity to travel to the US for a six-month work rotation.

Then, I met someone. At first, we kept it friendly, understanding our lives were on separate continents and that any romantic relationship would be on a clock. So, after my rotation ended, we said goodbye...until we didn’t. I returned to South Africa and Jonathan soon visited me. Six months after that, he visited again.

We had such a connection, but the distance and immigration obstacles seemed like impossible barriers to a future together. We made the decision to do whatever it took to end up in the same place. Initially, we tried to get him a rotation to South Africa, but it was simpler for me to do another US rotation. I asked for another rotation and came back to the US a second time, still on my work visa.

Image by Shawnee Custalow via https://shawneecustalow.com/

In 2007, without same-sex marriage and the related immigration benefits, a work visa was our only option, albeit a temporary solution. Work visas tie employees to one specific employer. If either my employer or I severed our employment relationship, I would have been required to leave the US within ten days. It’s an insecure way to live—and prevented me from putting down roots or forging long-term plans. That insecurity worsened during the 2008-09 economic downturn when many foreign rotational employees were laid off. It was a profoundly stressful time that was compounded by the long hours I worked trying to make myself indispensable to my employer and lifeline.

This uncertainty and anxiety lasted for years. Many opposite-sex couples in our situation would have married, entitling the foreign spouse to a green card and legal residency as well as an additional 1,100 rights that the federal government confers on married couples.

We however chose to get married for ourselves, and did so in a private ceremony in Massachusetts in 2009, even though we knew we wouldn’t get federal recognition. Our union came with no legal rights in terms of immigration, medical or tax benefits. Same-sex marriage was not federally legal—and wouldn’t be for another six years.

It did not guarantee our union would be recognized if, say, one of us was incapacitated at a U.S. hospital. We did our best to educate and garner support from the allies around us. We wanted people to understand what was at stake for those impacted by the Defense of Marriage Act (DOMA), which attempted to define marriage as a union between one man and one woman, while also allowing states to deny same-sex couples rights that other states may extend to them.

Finding allyship in the workplace

With same-sex marriage not yet federally recognized, we approached my employer at the time to ask them to apply for a green card on my behalf. Contrary to popular belief, applying for a green card is not something you can do yourself. Your employer has to petition on your behalf, prove to the federal government why they need you and value you enough as an employee to warrant the legal expense. An almost impossible task, but our only option for a permanent solution. We faced so many immigration visits and interviews; it all felt a little insane. Our baseline stress was off-the-charts; there were no guarantees or end dates in sight. We just hoped one day we’d find a more secure existence.

Until my green card arrived, which finally came through in April 2013, I hadn’t realized the full weight of the stress I’d been carrying with me. When it dissipated, it was instant—like a crash. The newfound security made such a difference to my mental health. Once again, it felt good to focus on work. I was lighter, freer, more productive and happier than I’d been in years. In total, seven stressful years, which now, thanks to the Supreme Court’s ruling in United States v. Windsor and Obergefell v. Hodges, takes bi-national LGBTQ+ couples only a few months to receive their green card; a benefit that opposite-sex couples have always been afforded. 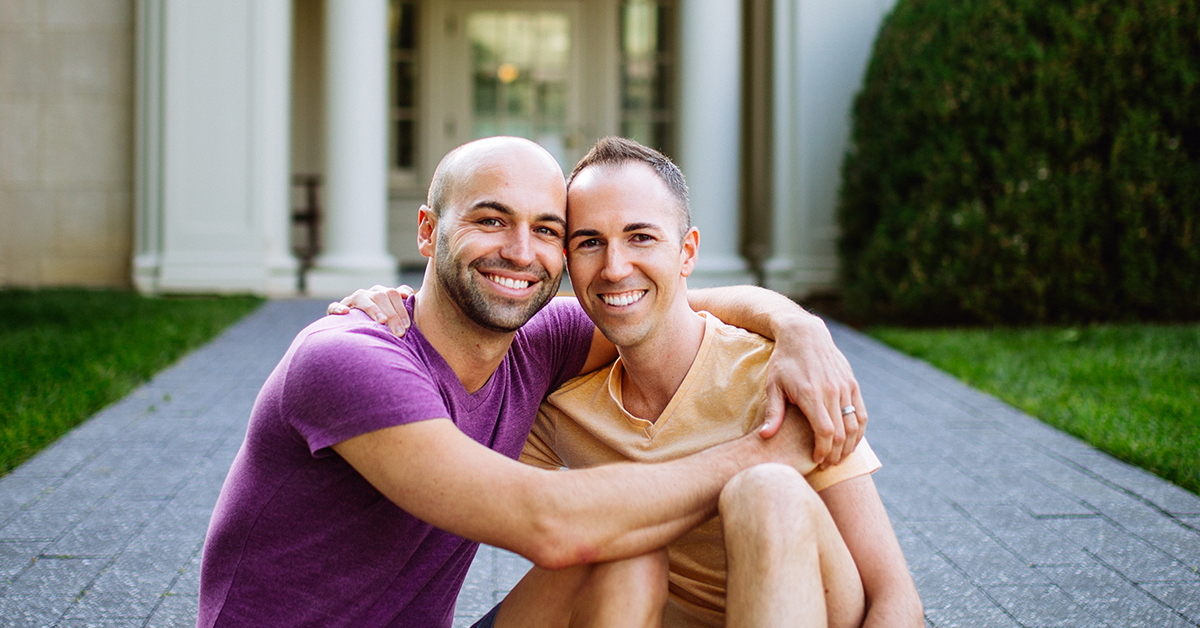 Image by Shawnee Custalow via https://shawneecustalow.com/

Be an ally in your community

The journey taught me the value of allies and I owe so much to my former colleagues. They were so supportive and it made all the difference. One Advisory Partner in particular sponsored my green card application. After it came through, he told me how proud he was to be a part of my story; he was quite emotional about it. This made me think about allyship in a new way. While allyship is so critical for those in need of support, it can be immeasurably rewarding for allies themselves.

Same-sex marriage is now federally recognized, so one hurdle has been removed. But the LGBTQ+ community still faces barriers and injustices: Many LGBTQ+ youth are kicked out of their homes, the transgender community faces markedly worse health and economic outcomes and LGBTQ+ employees can still be fired for their sexual orientation and gender identities. This is where allies and strong support are needed to initiate change.

You can be an ally in your community too. Seek out groups within your company or in your community that are looking for volunteers and building inclusive communities. Reach out to them, learn and ask how you can be of support to someone. You can also reach out to your lawmakers and voice your support for important legislation that will help usher in more inclusive laws and practices, like the Equality Act in the U.S. Or you can donate to organizations that provide housing, mental health and health care or other vital resources to those in the LGBTQ community who are in need.

As I continue on my allyship journey, I value and appreciate the opportunity to show up in support of communities. I might be in a better spot now, but the fight for equality is far from over and I can be an ally to those in need, just like the people who were there for me. You may not think you can achieve much as an individual, but it only takes one person to leave a lasting impact on someone else’s life.